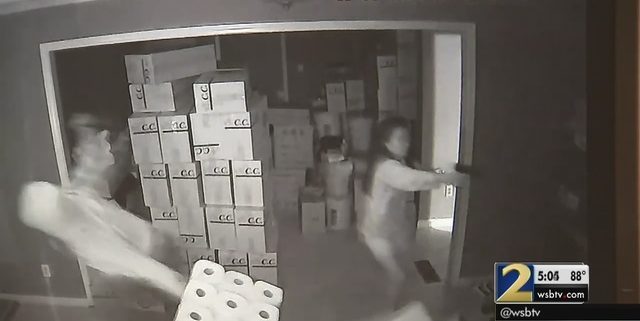 Three burglars in Gwinnett County Georgia, kick in a front door, but they are totally unprepared for what happens next as she chases them through her house emptying her gun at them as they try to escape:

One of the burglars is shot and killed. The other two manage to escape and police are on the hunt for them.

WSBTV – Police are hoping someone can help identify two home invaders. They were caught on camera as a woman in the house shot at them.

Surveillance video from inside the home shows the Gwinnett County woman rush from her bedroom and then unloads all her bullets on the three men who kicked in her front door.

The woman is a local restaurant manager who was staying in a housemate’s Spring Drive home for work-related reasons.

She heard the three intruders break into the home around 4 a.m. Friday. Video shows the men have guns clearly in hand.

Police said the men were looking for cash when they met their match.

As they exchange fire with drywall debris clouding the dark home, the video shows one man run through a glass door.

Another man died of his injuries in the driveway.

The video then shows the woman being consoled by a housemate who gently takes away the gun.

“It’s not common that we receive this caliber of surveillance video showing the crime unfold, an actual home invasion,” Washington said.

Its has been said that a gun is the great equalizer. This brave woman proves it. She’s clearly outnumbered, yet she defends herself, her roommate and her property because she knew she could.