A Washington, D.C., appeals court is set to hear arguments later this year on new net neutrality rules, which critics say could lead to government regulators censoring websites such as the Drudge Report and Fox News.

The U.S. Court of Appeals for the D.C. Circuit will hear oral arguments against the Federal Communications Commission’s rules on Dec. 4. A panoply of amicus briefs filed with the court last week offer a preview of the arguments.

In its February vote on net neutrality, the Federal Communications Commission stated that broadband providers do not have a right to free speech. “Broadband providers are conduits, not speakers … the rules we adopt today are tailored to the important government interest in maintaining an open Internet as a platform for expression,” the majority held in its 3-2 vote. 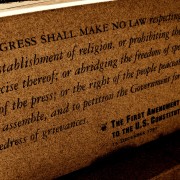 The Reason for Free Speech
0 replies