News
You are here: Home1 / News2 / News3 / Much talk about a Constitutional Convention 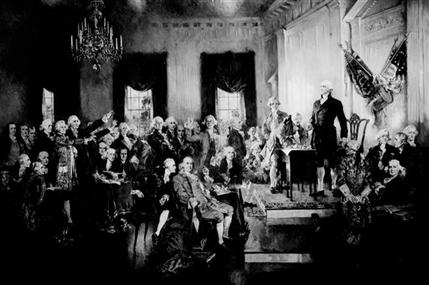 With Republicans controlling more than half the state legislatures across the country, some want to use that power to push for a federal spending limit through a mechanism unused since George Washington’s day.

Their plan: Persuade enough states to call a national constitutional convention so that a federal balanced budget amendment can be added to the Constitution.

It would be a historic move. The United States has not held a constitutional convention since Washington himself led the original proceedings in Philadelphia in 1787.

Former U.S. Sen. Tom Coburn of Oklahoma, an outspoken budget hawk and longtime supporter of a federal balanced budget amendment said “Everywhere I’d go at town hall meetings, people would say, `What are we going to do? There’s no hope. How do we fix our country?’ And the fact is, this gives great hope,”

There also are risks if the movement succeeds. A convention could expand to take on myriad issues beyond the federal budget, including limiting freedom of speech and other changes sought by Democrats.

Calling such an assembly would require approval from 34 states. The GOP now controls both legislative chambers in 30.

Convention proposals were introduced or discussed in about three dozen legislatures this year and approved by three of them. Over the past four decades, 27 states have endorsed the idea at one time or another.

Still, successfully calling a constitutional convention is a longshot.

Unlike other parts of the conservative agenda that have sailed through GOP statehouses, the convention debate is complicated because it involves three separate proposals that have overlapping – but not identical – goals. And even some leading Republicans consider a possible convention too unpredictable to support.

Backers of the idea hope the presidential race will stir more interest. Five of the Republican candidates have spoken favorably about it.

“It’s becoming a presidential issue,” said Mark Meckler, co-founder of Tea Party Patriots. “Candidates are being asked about it.”

Every state except Vermont has a legal requirement for a balanced budget, but Congress does not.

Under Article V of the Constitution, adding an amendment can be done via a two-thirds vote of Congress and then ratification by three-fourths of states, or 38. That’s the way all the current constitutional amendments came about, but few could imagine Congress passing a balanced budget amendment.

That leaves a second option: calling a constitutional convention. Two-thirds of the states, or 34, would have to request a national assembly to draft amendments. Any amendments would subsequently have to be ratified by at least 38 states to go into effect.

Three different proposals seeking a constitutional convention have been circulating in statehouses.

The one discussed most often this year was the “Convention of States” plan supported by Coburn and Meckler. It seeks an assembly with an agenda that would include the balanced budget amendment, term limits for offices that include the U.S. Supreme Court and broad caps on congressional taxation authority.

Alabama this year became the fourth state to approve it, and it was discussed in at least 35 legislatures. But the risk that Democratic priorities also could be considered during a constitutional convention was too scary for some, including in Texas, where the proposal died in the state Senate this session after passing the House.

“I was surprised at how strong the fear of a runaway convention was,” said state Sen. Paul Bettencourt, a Houston Republican who sponsored the proposal.

A more limited effort, named the Compact for America, is backed by the American Legislative Exchange Council, which provides model legislation for conservative lawmakers. It includes only the balanced budget amendment, which, at least theoretically, could discourage amendments on other topics. So far, it has been passed in Alaska, Georgia, North Dakota and Mississippi.

The third initiative is the oldest and closest to its 34-state goal, but also is the most unpredictable. In May, North Dakota became the 27th approving state. But that group also includes socialist -Marxist leaning states that would like to overturn the Supreme Court’s Citizens United decision from 2010, which upheld the First Amendment right of corporations and unions to spend unlimited amounts during political campaigns.

Also, some states approved the initiative decades ago, when their political composition was much different. That means some of them could rescind their approval if the initiative draws closer to the 34-state threshold.