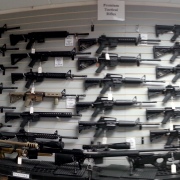 In an e-mail to its supporters, Calguns Foundation announced: California’s 10-day waiting period for gun purchases was ruled unconstitutional by a federal judge this morning in a significant victory for Second Amendment civil rights. The laws were challenged by California gun owners Jeffrey Silvester and Brandon Combs, as well as two gun rights groups, The Calguns Foundation and Second Amendment Foundation.

In the decision released this morning, Federal Eastern District of California Senior Judge Anthony W. Ishii, appointed to the bench by President Bill Clinton, found that “the 10-day waiting periods of Penal Code [sections 26815(a) and 27540(a)] violate the Second Amendment” as applied to members of certain classifications, like Silvester and Combs, and “burdens the Second Amendment rights of the Plaintiffs.”

“This is a great win for Second Amendment civil rights and common sense,” said Jeff Silvester, the named individual plaintiff. “I couldn’t be happier with how this case turned out.”

Under the court order, the California Department of Justice (DOJ) must change its systems to accommodate the unobstructed release of guns to gun buyers who pass a background check and possess a California license to carry a handgun, or who hold a “Certificate of Eligibility” issued by the DOJ and already possess at least one firearm known to the state.
“We are happy that Second Amendment rights are being acknowledged and protected by our courts,” said Donald Kilmer, lead attorney for the plaintiffs. “This case is one more example of how our judicial branch brings balance to government in order to insure our liberty. I am elated that we were able to successfully vindicate the rights of our clients.”

Attorneys Victor Otten of Torrance and Jason Davis of Mission Viejo were co-counsel for the plaintiffs.

“This ruling clearly addressed the issue we put before the court,” said SAF founder and Executive Vice President Alan Gottlieb. “We are naturally delighted with the outcome.”

“This victory provides a strong foundation from which other irrational and unconstitutional gun control laws will be challenged,” concluded Combs. “We look forward to doing just that.”

The court’s decision can be read or downloaded at http://bit.ly/silvester-v-harris-decision.

Chris W. Cox, President of the NRA Freedom Action Foundation announced the kickoff of the NRA Trigger the Vote campaign.  Cox states in an email to supporters: “Registering to vote is critical to preserving our Second Amendment rights.”

Cox further explains: “One of the missions of NRA’s Freedom Action Foundation is to protect the Second Amendment through a vigorous non-partisan voter registration program.”

It features a father taking out a small pistol safe from a closet and tells his son “Remember, this isn’t a toy. This is serious business.

The son asks his father why he has one, the dad responds, “To protect our family and our rights.”

The father opens the safe and reveals a voter registration card.

An interesting twist on citizen’s responsibility to act and to act responsibly when handling a firearm or voting.