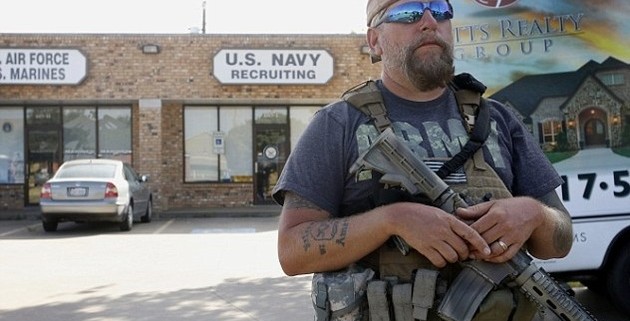 The Pentagon said in a statement Friday that it doesn’t want armed civilians standing guard outside of military recruiting centers anymore.

The patrols popped up after Mohammod Abdulazeez shot up a strip-mall military recruitment office along with a Navy Reserves station in Chattanooga.

Defense Secretary Ashton Carter said he asked service leaders a week ago to review weapons policy in the wake of the Chattanooga attacks, but some in Congress said he needs to act faster to ensure men and women in uniform can protect themselves.

“We take the safety of our service members, our DoD civilians, and the families who support them very seriously, and Secretary of Defense Ash Carter is currently reviewing recommendations from the services for making our installations and facilities safer – including our recruiting stations,” Pentagon press secretary Peter Cook said in a statement Friday.

“While we greatly appreciate the outpouring of support for our recruiters from the American public, we ask that individuals not stand guard at recruiting offices as it could adversely impact our mission, and potentially create unintended security risks,” Cook said. “We continue to partner with and rely on first responders for the safety of the communities where our service members live and work.”

Sen. Jerry Moran (R-Kansas) introduced the Safeguarding Service Members’ Second Amendment Rights Act this week to repeal bans on military personnel carrying firearms on military installations and Department of Defense sites. It would also block the president or secretary of Defense from prohibiting firearms down the road.

“The Second Amendment guarantees the ‘right of the people to keep and bear arms shall not be infringed,’ yet our men and women in uniform are banned from exercising this constitutional right when fulfilling their duties on American soil,” Moran said.

“This infringement on the constitutional rights of our service members has caused American military installations and DoD sites to become increasingly vulnerable to those who wish to do harm,” he stressed. “My legislation would repeal the laws, directives and regulations disarming military personnel, and empower our brave service men and women to defend themselves and others from violent attacks and acts of domestic terrorism.”

Carter said early this week that he “asked our services to look at further steps that they might advise be taken, and to get back to me in the next few days with their recommendations.” “Obviously force protection everywhere around the world, abroad and now at home, is a big priority for us at the department, and will continue to be.”

Harvard Law Professor: “If I could write the Bill of Rights over again, I...
Scroll to top