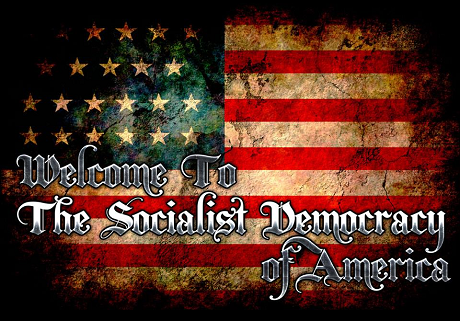 “America will never be destroyed from the outside. If we falter and lose our freedoms, it will be because we destroyed ourselves.” ~ Abraham Lincoln

The constitutional republic once known as The United States of America was conquered long ago and very few people even noticed. The US of A today has devolved into a socialist democracy bent on self-destruction. Stop and think for a minute, when was the last time you heard a politician, media talking head or ANYONE in any “official capacity” refer to America or her form of government as a “constitutional republic?” On the other hand, I doubt any one of you could even begin to count the number of times you have heard it referred to as a “democracy.” Democracy, defending democracy, spreading democracy around the world, democracy, democracy, democracy… Do you know what our founders thought of democracy?

Well, to begin with you will NOT find the word democracy, democratic or any other variation of the word in either the Declaration of Independence or the United States Constitution. Not even an honorable mention or a participation ribbon. What did they say about “democracy” outside of those founding documents? One of the most famous quotes is “Democracy is two wolves and a lamb voting on what to have for lunch. Liberty is a well-armed lamb contesting the vote!” ~ Benjamin Franklin. While old Ben had a colorful way of expressing it, others shared his distaste for the concept. “Hence it is that democracies have ever been spectacles of turbulence and contention; have ever been found incompatible with personal security or the rights of property; and in general have been as short in their lives as they have been violent in their deaths… A republic, by which I mean a government in which a scheme of representation takes place, opens a different prospect and promises the cure for which we are seeking.” James Madison [Federalist Papers No. 10 – 1787].

“A democracy is nothing more than mob rule, where fifty-one percent of the people may take away the rights of the other forty-nine.” Thomas Jefferson

“Remember, democracy never lasts long. It soon wastes, exhausts, and murders itself. There never was a democracy yet that did not commit suicide.” John Adams

“But government in which the majority rule in all cases can not be based on justice, even as far as men understand it.” Henry David Thoreau

Now, before you start throwing out phrases like “democratic republic” or “constitutional democracy” or “representative democracy” or some other concoction to cloud the issue, a CONSTITUTION and a DEMOCRACY are mutually exclusive. A constitution is a set “law of the land” with defined powers and rights. Our representatives are democratically elected to represent us WITHIN THE CONFINES of constitutional law, not mere public opinion. Changes to that “law of the land” can only be made by super-majorities of both the people AND the states. Even the Presidential election is not purely democratic, while the people do vote and the “popular vote” is counted, it is also balanced through the electoral college to insure that high population urban centers do not dominate the election while low population rural areas are left without representation. This insures that The President represents the WHOLE country and not just the few large cities of each state. Originally, US Senators were intended to be the voice of the STATES and the House of Representatives were the voice of THE PEOPLE. The passage of the 17th amendment was a MAJOR STEP AWAY from our constitutional republic and towards democracy by taking away the states’ voice and giving the people both houses of Congress based solely on popularity rather than states’ issues. Now there are those who call for the abolishment of the electoral college as well, which would for all intents and purposes complete that transformation. In a true DEMOCRACY there is no “law of the land” anymore, there is only the ever changing landscape of public opinion. Constant change and turmoil based on the hopes and whims of 50% + 1 of the population where RIGHTS no long exist for anyone, especially the minority, but privileges abound for the majority.

This really hit home for me as I was engaged in and following the debates regarding Open Carry in Texas. I heard over and over again that there was not sufficient “public support” for constitutional carry, so the best they could do is to expand the privileges of the very few CHL holders, who PAY to exercise their natural rights, to include the ability to open carry. It was, and still is, often argued that we lost the right a little at a time, incrementally, and that is the best or only way to get it back. That is a socialist-democratic thought process pure and simple. To think that we must restore natural rights a little at a time so as to build public support or avoid public outrage is, well outrageous. Our transition from republic to democracy has indeed happened incrementally over time in order to avoid detection of the destruction of our sovereign rights. To restore those rights that are already constitutionally protected does NOT require a democratic majority, public support or any other incarnation of democracy. Just after the completion and signing of the Constitution, in reply to a woman’s inquiry as to the type of government the Founders had created, Benjamin Franklin said, “A Republic, if you can keep it.” WE HAVE NOT KEPT IT!

Democracy inevitably leads to socialism such as the socialist democracy that we now have in place. Don’t kid yourself, we do in fact live in a socialist democracy, just look around you. Welfare, food stamps, social “safety nets” and redistribution of wealth (ie. progressive income tax)… “From each according to his ability, to each according to his needs!” Although this phrase is most commonly attributed to Karl Marx, the slogan was common within the socialist movement and was first used by Louis Blanc in 1851. The origin of this phrasing has also been attributed to the French utopianist Étienne-Gabriel Morelly, who proposed in his 1755 Code of Nature “Sacred and Fundamental Laws that would tear out the roots of vice and of all the evils of a society” including:

While we do still cling to some of the trappings of free society and free markets, it is increasingly becoming more socialized. You do not “own” property, even if your house or land is paid off, you still lease it from the government through property taxes. Stop paying the taxes and see how long you “own” your property. Public schools and universities increasingly teach our children that they are “citizens of the world” and denounce individualism through group think such as political correctness. What was once embraced as self-evident truths have been dissolved in a sea of collectivist thought and propaganda. Life is no longer a sacred right, at least not if you are as yet unborn or a military veteran seeking the care that was promised them for serving their nation. Liberty has become an antiquated idea because people cannot be trusted to exercise it in a manner that is agreeable to all, or at least that is the subtext behind the socialization and reliance upon government regulation. The pursuit of happiness, which was meant be long term happiness as in property, opportunity and security has given way to instant gratification and hedonism.

The more socialized we become, the less civil society becomes. The more democratic we become, the more divided we become. We split up into groups battling each other for what we want and the majority wins, whether their position is good for the nation or even state, the city or the individual is irrelevant. Mob Rule, winner take all and since the “have nots” will always outnumber the more productive and industrious “haves” then “democracy” works in their favor. Everyone imagines that the bottom 99% will be raised to the level of the upper 1%, but the reality is that the upper 99% will be lowered to the level of the lowest 1%. True “equality can only be achieved mathematically and socially at the lowest common denominator. At first it looks great. take from the rich and give to the poor in true Robin Hood fashion, there is just one problem.

“The problem with socialism is that you eventually run out of other peoples’ money.” ~ Margaret Thatcher