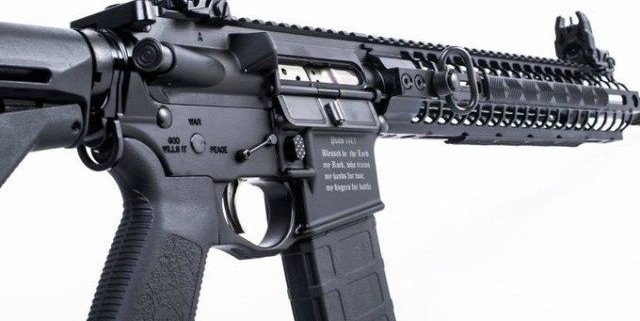 Gun manufacturer Spike’s Tactical has introduced a new AR-15 with a Bible verse etched upon it in order to prevent Muslim terrorists from handling or using the weapon.

The AR-15 is listed as The Crusader Rifle on the manufacturer’s website, described as a “lightweight mid-length rifle,” built to be used for tactical applications or for competition. The words of Psalm 144:1—”Blessed be the Lord my Rock, who trains my hands for war, my fingers for battle” are etched upon the right side of the gun’s lower, while a cross and shield are etched upon the left side.”

Along the AR-15’s safety lever are the Latin words “Pax Pacis” (Peace), “Bellum” (War), and “Deus Vult” (God Wills It). Peace is the gun’s safe position while “War” is the gun’s fire position.

According to WTSP 10 News, Spike’s Tactical spokesman Ben “Mookie” Thomas explained why the company decided to create the Crusader:

“Right now and as it has been for quite some time, one of the biggest threats in the world is and remains Islamic terrorism. We wanted to make sure we built a weapon that would never be able to be used by Muslim terrorists to kill innocent people or advance their radical agenda”.